Brought to you by Santisi Brothers Pizzeria & Sports Grill

The Red Zone with Russ Bliss, your Fantasy Football Guru, teams up again with Santisi Brothers Pizzeria & Sports Grill. Listen to Russ every Wednesday from 6pm-8pm.

Santisi Brothers Pizzeria & Sports Grill is located at 2710 W. Bell Rd in the Bell Canyon Pavilions, just west of I-17 on Bell Road. 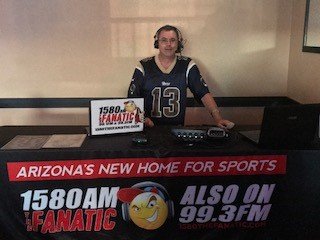 Russ Bliss has hosted The Red Zone since 1997, making it one of the longest running continuous fantasy football radio shows in the world, if not the longest running still on the air. Starting on what is now NBC Sports Radio AM 1060, he has hosted the show on that station until now. During that time he also hosted shows on Sirius/XM on the Sports Byline USA Network and also a local show in Pittsburgh, PA. For 14 seasons Russ was the lead fantasy football analyst and general partner of a very successful fantasy website. During that time, he received recognition from Bloomberg News, Pro Football Weekly, and his blog “Tips From The Red Zone” was recognized as one of the top Fantasy Football Blogs by the Wall Street Journal.

Copyright © 2021 CRC Broadcasting, LLC. Public File. FCC Applications . EEO Public File Report. Privacy Policy | Jobs. This web site is not intended for users located within the European Economic Area, but totally cool for everyone else that likes to PARTY!